I am Afrina Azman. Currently I am in my third-year majoring in Bachelor of   Arts in Foreign Language in Universiti Putra Malaysia learning French. French courses in UPM are so fun and full of knowledge. I learnt a lot of new knowledge every day, from verbs, conjugation to new words. However, I have the fear to speak in the language that I am learning, I have less understanding or comprehension for the language that I am studying, as if it is not enough just to learn those in class. Theoretically, my performance in class was not bad at all, but my skills, are bad. Bad in this case I would say very bad because I have to think before I speak even if it is a simple sentence such as where are you from? Or have you eaten? Well, in written, I could do it, but not in real life, no I could not. Same thing applies to my comprehension skills, in class, yes I would understand because the lecturers would talk slowly to us unlike the speed rate of a normal conversation but when it comes to comprehension test, sometimes, I am lost and I do not understand what they were saying. Thus, in my third year, I decided to join an exchange program held by the department of foreign language to University of La Rochelle, in France. Other than that, I was determined to go to France to improve my French was because of a friend who went to Japan to improve her third language, Japanese. She motivated me and told me it would be worth it.

I was scared. Very scared. That was my initial thought before I went to France. I did a lot of thinking, I discussed with my supervisor, Madame Hazlina and of course with my parents. I was genuinely scared because there were people telling me that I was going to waste a year of my studies since I have to repeat the whole year of my final year when Im back from France. Other than that, the fact that I will graduate later than my batchmates are one of the reasons that affected my doubts to join the mobility program and of course the day before I depart to France was the last day I am seeing my friends and the thought that they will no longer be here in UPM when I returned saddens me. After thinking about the pros and cons, I decided to stick to my decision to join the mobility program for a year with only one goal and that is to improve my French.

The first time I stepped out of the airplane, it was chilly. Super cold to the core that I shivered like crazy but maybe it was because I was nervous too. When I arrived, it was already late. I did not have my phone signals as I forgot to switch on roaming and mind you, I still could not speak French and not even the basic ones. Even if I could, I still cannot understand what the locals were telling me. So, I was looking for my hotel, but I completely do not know how because I did not have phone signals, internet and mobile data. The shops were mostly close, and no one sells the phone cards. I tried to speak to the person at the counter and they gave instructions in French. I was so lost, and a little bit scared and anxious thinking of ways how can I go to the hotel. But luckily, I met someone who was very nice to help me to show the way. Since I departed a month before my class started, the next day I went to Rouen, a city that is not too far away from Paris to meet my friends who have been there for a few years.  I decided to go a month earlier because I want to adapt with the surrounding and explore new things. Therefore, when class started, I would not be so shocked. 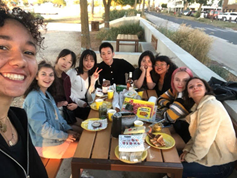 Before I arrived, I had stereotypes towards the French people that they are snobbish, unfriendly, and unapproachable. But I was wrong! Absolutely wrong! When I was in Rouen I made friends with a lot of people and I hit jackpot when I could manage to find a foster mom! In this case, it never happened before because UPM does not provide you with foster family in the program, but I am very lucky to have one!  After thinking about this, since the first day I arrived at the airport with heavy luggages, there were the locals who helped me going up and down the stairs carrying my bags and help me. When the class started, I was scared, timid and shy because French students in general are hard to approach. They only go around and mix with their circles and they will only talk to us if we, ourselves, do the effort to talk with them. However, the goal was to improve my French. In every way possible. Therefore, I befriend with everyone. I talk to everyone and day by day it gets easier to befriend with people especially the local students. I was using broken French while talking to them but they understand that we are learning so that is okay! It is not a problem. Not at all. They are actually very fun to hang with. They will help you to improve your French, they will correct your pronunciation, your conjugated verbs and they will also teach you the informal language or French lingo that are commonly used by the French especially the youngsters. Now, you are learning on how to be like a real French speaker, which words are to be used in an informal discussion and many more! 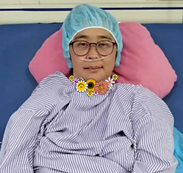 However, my days in France were not only rainbows and sunshine. During the pandemic, it hit home. It was the longest days of my life. The first country in Europe that got affected by Corona Virus was Italy, France did not think that it could spread that fast and easily. They closed the border a little bit late. It happened when I was on a semester break on February and I was on tour in France moving from one city to another. When I arrived in La Rochelle, I got a call from the university lodging, asking us to empty our accommodation. My friends and I were worried because our flight back home is on June and it was just February. After negotiating with the person in charge, the officer let the international students to stay. I was quarantined in a very confined room for 3 months. It was stressful. But that was not the worst that had happened. I remember clearly, I was answering my mid-term test online when I received a call from my sister who asked me to talk to my mother but I said I cannot, because I am doing my test. Later, after I was done, I tried calling my mother but there were no one answering. I texted her, no one is responding. Again, I was very worried. Then I received a text from my sister telling my mother was put to sleep because her lungs are not working very well and she has a slight chance to survive. I was out of words and was very numb but luckily, I have the support from the people I love especially my boyfriend, whom I met in France. Later that day, it was my dad and my sister who were positive covid-19. It breaks my heart to know that I could not be with them at this time. However, all of my family members who were affected recovered from the virus and the most important thing is that they survived.  I am glad that I could still see their faces.

Moving on to my most memorable experience during my semester exchange is to be able to explore new culture and meet new people. The chance that I got when I travelled to a lot of European country are crazy. From France to Portugal, from Spain to Brussels. Travelling with friends, traveling alone have change the way I see the world. I got out of the box and have tested my limits. Now I know what I am capable of doing and know my weakness and strength. Meeting new people by couchsurfing while travelling is also my favourite thing. I am very proud of how everything turns out. Joining this mobility program has taught me a lot and has changed me as a person. The best thing is that I have achieved my goals. To be able to speak French Fluently. Therefore, it was not a waste of a year at all. It is more like a year of growth and experience for me. It was hard but believe me it will all worth the trouble.

I am ending my article by proposing to all of the students, especially language students to join the mobility program. It will help you a lot in improving the language that you are studying. None of the time there is a waste. You could improve in a lot of thing and not just your capability of speaking the language but you could also improve yourself, you can go beyond your limit and you’ll do things that you never thought you could. 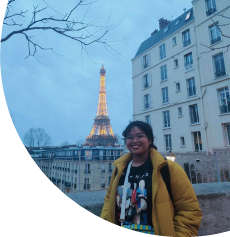