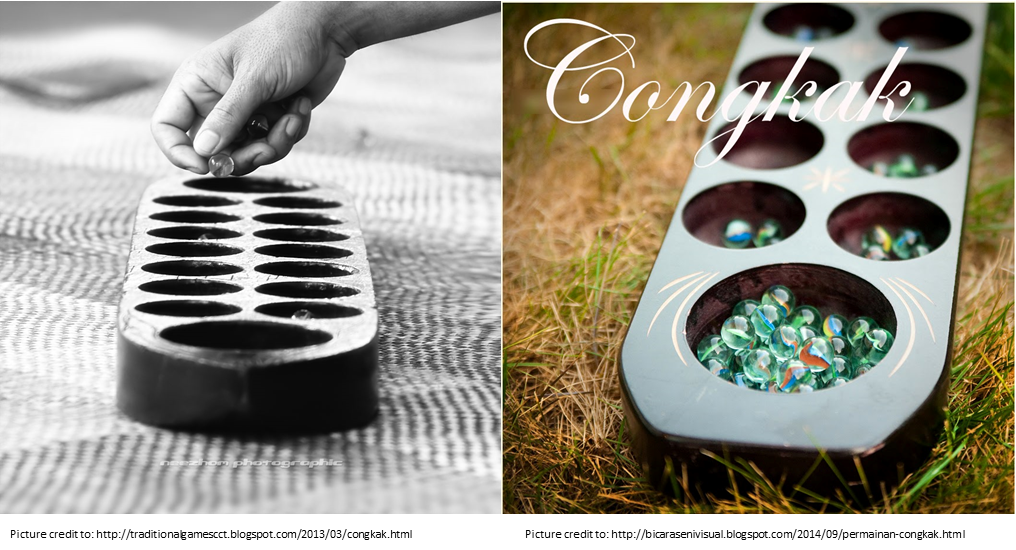 Congkak is a traditional Malay game often played as an indoor activity or as a competition. Often, it uses hollow perforated wooden planks or holes on the ground and usually a ‘buah’ (game piece) using rubber seeds or marbles.

In Southeast Asia, Congkak may develop from Melaka as the state is a trading center in the past. The name "congkak" is believed to be derived from the Malay word "congak" which means mental calculation. Besides the Malays, the Congkak game is also famous among the descendants of Indian and Baba Malacca. In the Caribbean Congkak is known as Warri or Awari. In Indonesia, Congkak is known by the name Congklak, while in the Philippines, Sungka.

In a Congkak set, there are two components which are the Congkak board and Congkak piece. The board are shaped like boats and can be made from different types of wood or by digging holes on the ground. There are five to seven inline holes known as 'kampung' (village) and at both ends there is a main hole known as 'rumah'(home). The lenght of the 7 holes Congkak board is usually around 80 cm wide and the diameter of the seven holes is usually about 18 cm.

In this game, the player will start it simultaneously. They will take Congkak piece from any of the ‘kampung’(usually around 7 piece per ‘kampung’) and put one at a time into subsequent ‘kampung’s in a clockwise direction. The main goal is to put as many Congkak piece in respective ‘rumah’. One’s round ended when the Congkak piece stop in an empty ‘kampung’. Ones own ‘rumah’ is located at the left end of each player. Each player will continue the game until the each ‘kampung’ runs out of Congkak pieces. A player with the most Congkak pieces in their ‘rumah’ takes the win.