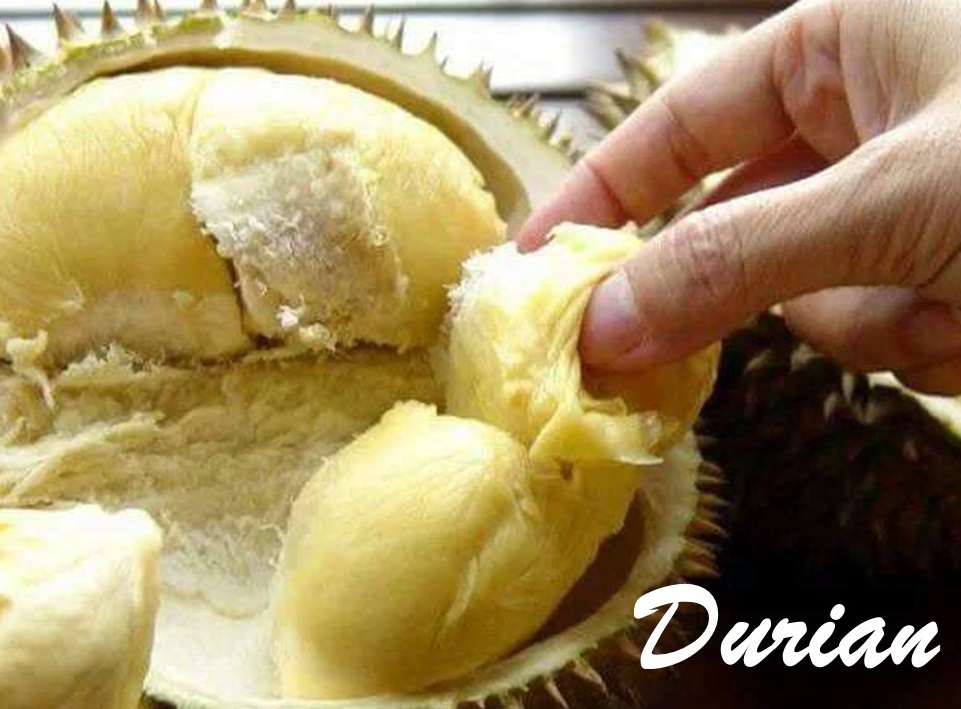 Durian is the fruit of several tree species belonging to the genus Durio. There are 30 recognised Durio species, at least nine of which produce edible fruit, with over 100 named varieties in Indonesia, 300 in Thailand and 100 in Malaysia.

First used around 1580, the name "durian" is derived from the Malay language word ‘duri’, meaning "thorn", a reference to the numerous prickly thorns of the rind, together with the noun-building suffix  ‘an’. Regarded by many people in Southeast Asia as the "king of fruits", the durian is distinctive for its large size, strong odour, and formidable thorn-covered rind. The fruit can grow as large as 30 centimetres long and 15 centimetres in diameter, and it typically weighs one to three kilograms. Its shape ranges from oblong to round, the colour of its husk green to brown, and its flesh pale yellow to red, depending on the species.

Durian trees are large, growing to 25–50 metres in height depending on the species. The leaves are evergreen, elliptic to oblong and 10–18 centimetres long. The flowers are produced in three to thirty clusters together on large branches and directly on the trunk with each flower having a calyx (sepals) and five (rarely four or six) petals. Durian trees have one or two flowering and fruiting periods per year, although the timing varies depending on the species, cultivars, and localities. A typical durian tree can bear fruit after four or five years. The durian fruit can hang from any branch, and matures roughly three months after pollination.

The unusual flavour and odour of the fruit have prompted many people to express diverse and passionate views ranging from deep appreciation to intense disgust. Common comparison has been made with the civet, sewage, stale vomit, skunk spray and used surgical swabs. The wide range of descriptions for the odour of durian may have a great deal to do with the variability of durian odour itself. Durians from different species or clones can have significantly different aromas. The degree of ripeness has an effect on the flavour as well. Scientific analyses of the composition of durian aroma found numerous volatile compounds including esters, ketones, and different sulphur compounds, with no agreement on which may be primarily responsible for the distinctive odour. Despite its great local popularity, the raw fruit is forbidden from some establishments such as hotels, subways and airports, including public transportation in Southeast Asia.

Durian fruit is used to flavour a wide variety of sweet edibles such as traditional Malay candy, ice kacang, dodol, lempuk,. In Sabah, red durian is fried with onions and chilli and served as a side dish. Tempoyak refers to fermented durian, usually made from lower quality durian unsuitable for direct consumption. Tempoyak can be eaten either cooked or uncooked, is normally eaten with rice, and can also be used for making curry.