Zebrafish or trade name’s Zebra Danio  is a tropical freshwater fish belonging to the family of Cyprinidae and native to the Himalayan region. Compared with animals such as mice, researchers/users can do testing on zebrafish embryos at a lower cost and get the results in a shorter time. A female zebra fish can produce hundreds of embryos at one time when compared with the rat that only a dozen. This can reduce the time and increase the number of tests and accuracy of the data. Zebrafish also has about 80% of the gene sequences that are similar to human genes.

In addition, the reduction of animal testing is one of the goals set out by FDA in ISO10993, where zebrafish is an alternative organism, which is highly efficient to replace rats and other test animals.)

A team of researchers from Universiti Putra Malaysia (UPM), lead by Dr. Syahida Ahmad, Biochemical Department, Faculty of Biotechnology and Biomolecular Sciences, has succeeded in developing an easy-to-use, fast and cost-effective kit for rapid toxicity screening of chemicals or compounds using ornamental zebrafish. 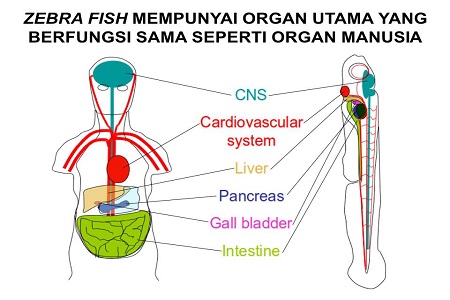 Danio Assay kit was developed using the unique properties of zebrafish or scientifically named as Danio rerio. Danio Assay Kit is a ready-to-use kit for toxicity screening of chemicals/ compounds, drugs, chemicals, food or drink. It is a test for predicting the side effects of short term or long term usage of chemicals/ drugs on human. Kit is easy to use, fast, cost effective and experiment do not require a large space.

How does it work

Thus, zebrafish embryos can be used as a guide for studying the effects of chemicals/ drugs or water pollution on humans before birth until after birth. 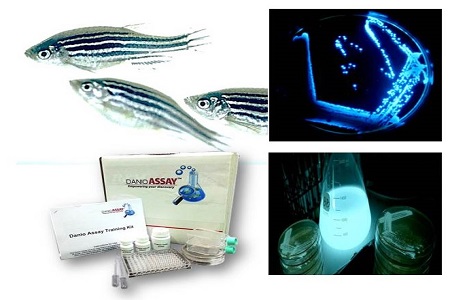 Danio Assay Kit is 60% cheaper and 50% faster compared to toxicity tests using mice or rats. Cheap, fast, sensitive and reliable.Understand more about the short-term and long-term effects of chemicals or medications to zebrafish embryos development can be applied to the effect of embryo development in mother's womb until after birth.

This product/ technology can be applied in Health, Medicine, Environment and Education industry. Researchers, students, Environmental Health Officers and manufacturers of food/ beverage, cosmetics or drugs is the target consumer. Danio assay kit is offered at price range of RM800 - RM1,500 per box.

Currently, Danio Assay Kit is under market validation process which conducted by a UPM startup company, which is Danio Assay Laboratories Sdn. Bhd.